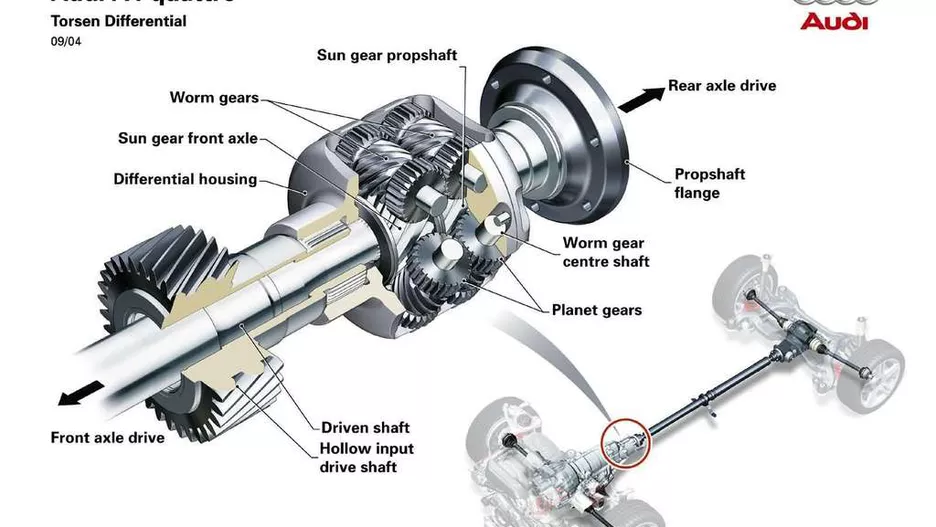 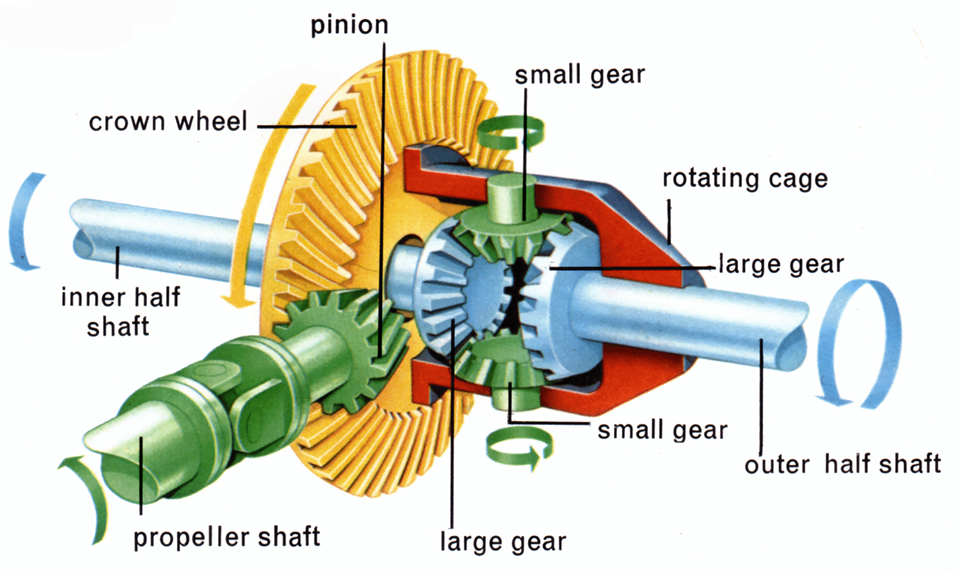 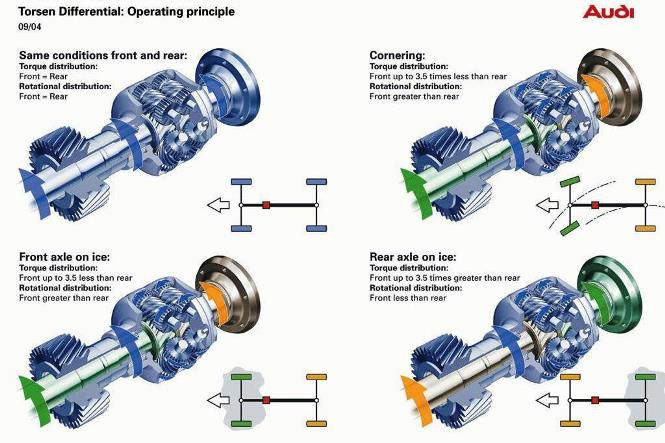 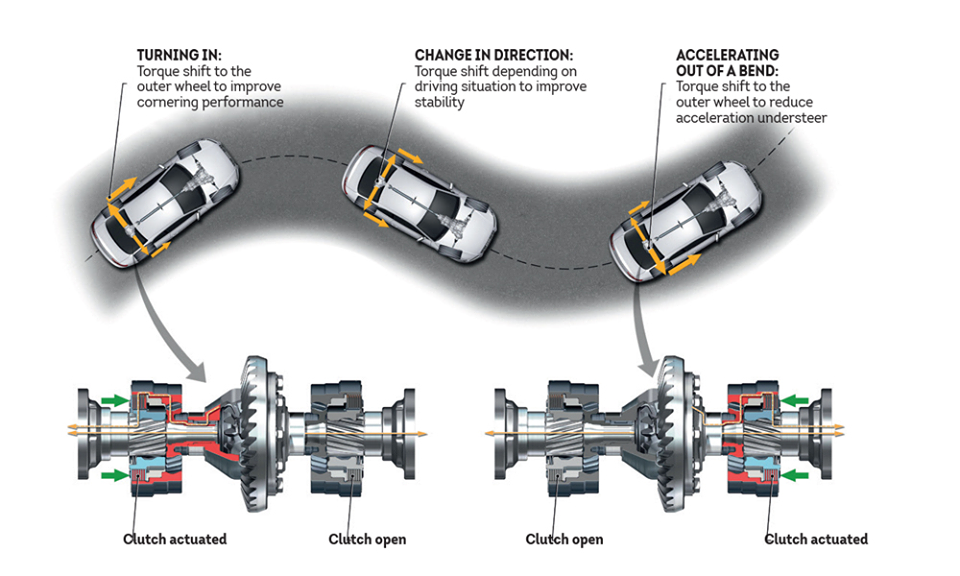 Differential functions to reduce the speed received by the propeller shaft to produce a great moment and to change the direction of rotation of the propeller shaft 900 is transmitted to wheel next round through the rear axle shaft rear separately. However, if the differential is not working then it will result in the vehicle which cannot be run A.

At the time of straight road.

At the time of turning.

At the time of vehicle turning left prisoners left wheel is bigger than the right wheel. If the differential case with the ring gear rotates the pinion will rotate on its axis and also the movement around the left side gear, so round the right hand side gear increases, the side where the number of revolutions of the gear which is 2 times round the ring gear. It can be said that the average second round gear is comparable with the rotary ring gear. as it should.

The basic principle of the differential gear unit can be understood by using equipment that consists of two gears pinion and rack. Both rack can be moved in the vertical direction as far as the weight rack and slip resistance will be lifted simultaneously. Placed between the tooth pinion rack and pinion gear connected to the braces and can be moved by these braces. When the same load “W” placed on each rack then braces (Shackle) is pulled up the second rack would be lifted at the same distance, this will prevent the pinion gear does not rotate. But if a greater burden placed on the left rack and pinion buffer will then be drawn up along the gear rack rotates the load gets heavier, which is attributed to differences in prisoners who are given the pinion gear, so the smaller the burden will be lifted. The raised rack spacing is proportional to the number of turns pinion gear. In other words that rack gets custody larger still and while prisoners who received a smaller load will move. This principle is used in the planning of differential gears.

1. Further reduces the rotations coming from the gear box before the same are passed on to the rear axles.
2. Changes the direction of axis of rotation of the power by 90o i.e. from being longitudinal to transverse direction.
3. To distribute power equally to both the rear driving axles when the tractor is moving in straight ahead direction.
4. To distribute the power as per requirement to the driving axles during turning i.e. more rotations are required by the outer wheel as compared to the inner wheel – during turns.

THE MAIN COMPONENTS OF THE DIFFERENTIAL

Open differentials are the most basic form of a differential. The purpose is to allow for different speeds between the two wheels, while torque split is held constant at 50/50. A common misconception with open differentials is that when one wheel is lifted, 100 per cent of the torque is sent to it. This is not true, however the amount of torque sent to the wheel with traction is very low because the amount of torque required to spin a wheel is also low. Remember, both wheels always receive equal torque, but if one has no resistance (eg. if it’s in the air), the amount of torque sent to the drive axle as a result is very low.
• Splits the engine torque into two outputs
• Allows the wheels to rotate at different speeds
• When one tire loses traction, the opposing tire will also lose power
• Found in family sedans and economy cars

Advantages:
• Allows for completely different wheel speeds on the same axle, meaning no wheel slip will occur while going around a corner, as the outside tyre will travel further.
• From an efficiency standpoint, less energy will be lost through the differential versus alternative options.
• Cost.

Disadvantages:
• When one wheel has poor traction, this drastically limits the amount of power the vehicle can put down. Because the torque distribution is always 50/50, if one wheel cannot put down much power, the other will receive an equally low amount of torque.

Locked differentials are on the opposite side of the spectrum versus open diffs. The purpose is for wheel speed to remain constant between the two wheels, and the major benefit here is that torque will go to the wheel with traction, up to 100 per cent at a single wheel. For off-road use, it is common for the differential to have a locking feature, so that it is open when driving on pavement.
• Connected wheels always spin at the same speed
• Turning the vehicle can be very difficult
• Found in Jeep Wranglers and most full-size trucks

Advantages:
• Allows for torque to go to the wheel with the most traction. For all differential styles, this will allow for the most torque to reach the ground on any surface condition.
• For off-road use where tyre wear is not an issue, this is about as good as it gets. Robust, simple, and very effective.
• In situations where it’s desirable to keep wheel speed constant on an axle (ex: drifting), this is an easy solution (a welded differential works exactly the same).

Disadvantages:
• A locked differential will not allow for wheel speed differences between the right and left wheels. This means additional tyre wear, as well as binding within the drivetrain as a result.

VLSD are fairly simple as far as operation, however they have some drawbacks in comparison to other forms of LSDs.
• Combination of open and locking differentials
• Usually acts as an open differential
• Automatically locks when slipping occurs
• Found in sports vehicles like Nissan 370Z and the Mazda MX-5 Miata

Advantages:
• Allows for different wheel speeds on an axle, thus reducing tyre wear versus a locked differential (the same applies for all forms of LSD, but this style is particularly good for it).
• Allows for torque to be sent to the wheel which has more traction.
• Very smooth operating, typically won’t have the low speed clunkiness associated with other LSD types navigating in a tight radius (eg. parking lots).

Disadvantages:
• Cannot fully lock up, the system requires a speed differential between the two sides in order to transfer torque.
• As the internal gear fluid heats up (in cases where it’s being used too frequently), the effect of the LSD will be reduced.

Clutch type LSDs come in a wide variety. one-way, 1.5-way, two-way, and even electronic. In principle, they all operate very similarly, with a clutch pack that attempts to lock up the differential, allowing for torque to be sent to the wheel with the most grip.

Advantages:
• Applies lock when throttle is applied. Unlike a VSLD, this means that torque split can occur before one wheel reaches a different speed (similar to a locked differential).
• For one-way LSDs, the differential acts like an open diff when not on the gas, thus easily allowing for different wheel speeds while cornering.
• For two-way LSDs, the differential applies locking force while decelerating, which in some cases can help with braking stability.
• Works well even if one wheel is off the ground or has limited traction.
• Electronic LSDs allow for the clutch engagement to be controlled by the onboard computers, optimising lock based on the driving conditions.

Torsen and helical differentials work in a fairly similar fashion, using clever gearing to apply locking force to transfer torque to the wheel with more grip. They’re great for street use and even light track use, though they do have a disadvantage.

Advantages:
• These differentials begin to send more torque to the slower-rotating wheel the instant there is a speed differential between them. Essentially, it reacts far quicker than a VLSD.
• These are purely mechanical systems, with no routine maintenance required as the differential action is dependent upon friction throughout the gears.

Disadvantages:
• When one wheel is in the air, a Torsen diff acts very similarly to an open differential, and very little torque is sent to the drive axle. For street use this is completely acceptable, but it may be an issue for more purpose built vehicles on the track.

Without a doubt the most complex of the differentials, this option allows for the greatest amount of control by the developers, meaning unique programming to react to any situation, as well as the ability to help induce yaw.
• Uses additional gear trains
• Fine tunes the torque delivered to each drive wheel
• Can slow down or quicken the car’s rotation around a corner
• Heavy, complex and low-performing for fuel economy
• Found in the BMW X5 M or the Lexus RC F

FAHADH V HASSAN Hi, I'm Fahadh V Hassan an aspiring blogger with an obsession for all things tech. this blog is dedicated to helping people learn about technology.
Leave Comment

Hi, I'm Fahadh V Hassan an aspiring blogger with an obsession for all things tech. this blog is dedicated to helping people learn about technology.

Feel free to join me on My Social Networks.

It's Me Fahadh V Hassan, This is My Official Website.